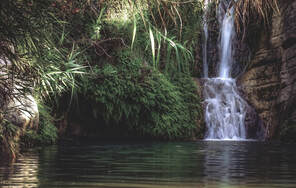 As I've continued my readings in Samuel I've been amazed that, even though David spared Saul's life on two occasions, Saul was relentless in pursuing David to take his life. In 1 Samuel 23 we read how the Ziphites went to Saul to tell him where David and his men were hiding. David was told that Saul was after him so he moved down to the rock in the Desert of Maon. When Saul heard this he went in search of him and at one point Saul was going along one side of the mountain and David and his men were on the other side, hurrying to get away from Saul. Imagine how scary that must have been for David and his men! As Saul and his forces were closing in on David and his men ready to capture them a messenger came to Saul to tell him the Philistines were raiding his land at which point Saul left his pursuit of David to go and deal with the Philistines. That is a wonderful example of how God protected David even though the enemy was so close! No wonder David could write as he did in the Psalms, he knew first hand God's incredible care and protection of him. He had been in the most frightening situations and known real danger and yet he could write in Psalm 27:5  "For in the day of trouble he will keep me safe in his dwelling; he will hide me in the shelter of his sacred tent and set me high upon a rock."

David's God is our God, he's an unchanging God and is watching over us and caring for us in each and every day no matter what situations we face, we can trust him and remind ourselves of the words of David "The Lord is the stronghold of my life - of whom shall I be afraid?"
12th September 2022 - Proverbs 4:23 (NLT)
​"​Guard your heart above all else, for it determines the course of your life." 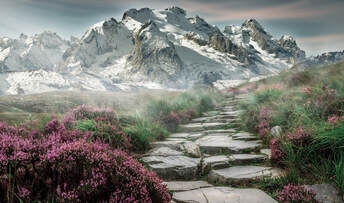 This week I read the familiar story of David and Goliath. David was sent by his father to see how his three oldest sons were doing in the Israelite army and to take provisions for them. When he arrived he went to talk to his brothers who were lined up facing the Philistine army. As he talked with them Goliath, who was nearly ten feet tall, came out and shouted in defiance at the Israelite army who then fled in fear! David was listening to this and and began to question the men around him. When his eldest brother heard him speaking with the men he became angry and spoke to him in a very derogatory way, calling him conceited and wicked but David was angry that Goliath would defy God's army and said he would go and fight Goliath.

I'm sure they all thought he didn't stand a chance, but David was not afraid because he knew God could deliver him just as when he'd killed a lion and a bear that had come to attack the sheep on the hillside. So David went to fight Goliath, not with sword and spear but with five stones and a sling! As you may remember David killed Goliath with a stone from his sling that struck Goliath on the forehead. God defeated the Philistines that day. As a result Saul honoured David who was given a high rank in the army and became so successful that people sang 'Saul has slain his thousands but David his tens of thousands.' Saul got to hear of this and was filled with anger and jealousy, and from then on was intent on taking David's life.

This story made me realise how quickly wrong thoughts and jealous feelings can spoil and destroy relationships and how important it is that we guard our hearts. David's own brother was consumed with anger and Saul lost the kingship because of his disobedience to God. He then pursued David to take his life out of sheer jealousy and anger.

Let's be vigilant to guard our hearts and when wrong thoughts creep in let's take them captive as 2 Corinthians 10:5 says, "we take captive every thought to make it obedient to Christ".
5th September 2022 - 1 Samuel 16:7
​"​​The Lord does not look at the things people look at. People look at the outward appearance, but the Lord looks at the heart."

Things are not always what they seem! 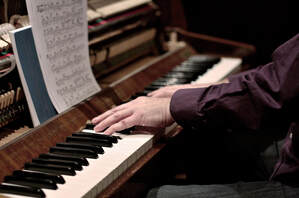 I recently heard the story of George Shearing, who was born blind. As a child he heard the sound of a piano being played in a pub and knew he wanted to be a pianist. He trained at Linden Lodge School for the Blind and went on to become a British jazz musician and composer who also rose to fame in America. One day he took a flight to Chicago where he was due to perform. The plane stopped at Denver on the way and the passengers had the opportunity to get off and take refreshments in the airport lounge or they could stay on the plane. It seems all the passengers disembarked apart from George and his guide dog. After a while the pilot came through, recognised George and was delighted to meet him as he was a great fan of his music. He offered to take George's dog off the plane for a walk before the flight resumed. After what seemed some considerable time George was concerned so rang his buzzer for assistance. The flight attendant soon appeared and George asked what the delay was and why hadn't the passengers returned. The attendant explained that they were having a problem getting the passengers back on board as the pilot had been spotted out walking with a guide dog!

It reminded me of the story of Saul. The children of Israel had been led by the Lord as their King up to this point but now they wanted to be like the other nations around them and have a king. This displeased Samuel and God spoke through him to warn the people against it, but they insisted so Saul was anointed king. 1 Samuel 9:2 says of Saul he was "as handsome a young man as could be found anywhere in Israel, and he was a head taller than anyone else." However if you read on a few chapters you'll see that Saul didn't wholeheartedly follow God or obey his instructions so God rejected him as king. God then sent Samuel to Jesse of Bethlehem as he had chosen one of Jesse's sons to be king. When Samuel saw Jesse's sons he was sure one of them was the Lord's anointed, they were tall and good looking but God said, "The Lord does not look at the things people look at. People look at the outward appearance, but the Lord looks at the heart." The Living Bible puts it like this "I don't make decisions the way you do! Men judge by outward appearance, but I look at a man's thoughts and intentions."  So it was that David, the youngest son who was out tending the sheep, was brought in before Samuel and the Lord said he was the one. 1 Samuel 13:14 tells us that "the Lord had sought out a man after his own heart".

God wants us to follow him wholeheartedly. He looks at our hearts and our intentions and wants to help us grow in our relationship with him. We'll make mistakes along the way but he walks with us, teaching us and guiding us so we can be who he intended us to be.
29th August 2022 - 'The truth is within'
"The Spirit of truth ... you know him, for he lives with you and will be in you." (John 14:17) and "When he, the Spirit of truth, comes, he will guide you into all the truth." (John 16:13) 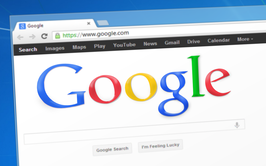 ​I had been given a Rolling Confidential Stamp for Christmas a couple of years ago and found it very useful for going over confidential information on letters etc. A few weeks ago it ran out of ink and my daughter told me I could get a refill which I hadn't done anything about! Last Sunday I was searching for something and came across 3 ink refills for the roller! So there I was with 3 ampules of ink and no idea how to refill it, when I remembered that both my brother John and my daughter always said to me 'Google it' if ever there was an unanswered question. I must admit I haven't very often 'googled it' but decided I would and was really pleased to find the solution and am now able to use my stamp again.

This got me thinking that in the same way we can use search engines such as Google to find out information, as Christians we have unlimited access to everything we need to know through God's word and the Holy Spirit who lives within. John 14:17 tells us that God will give us the Spirit of truth and "you know him, for he lives with you and will be in you." Again in John 16:13, "When he, the Spirit of truth, comes, he will guide you into all the truth."

Last week I was really encouraged by reading the wonderful truths found in Romans 8:31-39 and Ephesians 3:16-21.
22nd August 2022 - Lamentations 3:22,23
"The steadfast love of the Lord never ceases; his mercies never come to an end; they are new every morning; great is your faithfulness."​ 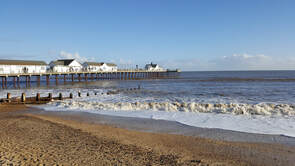 I was on the beach the other day watching my grandson building a defence with the sand against the incoming tide. He shored it up a few times as the tide came in higher but eventually the sea had it's way. I thought of how the tide comes in and goes out no matter what is going on around it. Having had a difficult week, I asked the Lord what he was saying and he brought this verse to mind:

"The steadfast love of the Lord never ceases; his mercies never come to an end; they are new every morning; great is your faithfulness." (Lamentations 3:22,23 ESV)

I was reminded that, no matter what, the Lord's love is consistent and each day there will be mercies, or compassion as some versions put it, that we need for each day. He doesn't give us today what we'll need for tomorrow, but it will be there, new every morning. What a wonderful, faithful God we have.
​​​​​​Return to Home page