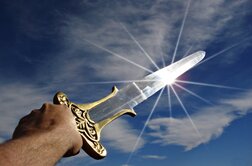 Read 1 Samuel chapters 29 to 30 for an amazing story of how David walked with God through the challenges of battle, loss, despair, and victory.

In the midst of this story, we have a pivotal verse: 1 Samuel 30.6, ‘But David found his strength in the Lord his God.’ A powerful statement made even more so when we consider the context.

David is tagging along with the Philistine army; he is doing the work the Lord has called him to do. When the leaders become wary, they don’t trust him and fear he will attack them in battle. David has a fierce reputation as a warrior. When he is told to leave, he reacts and says, ‘but what have I done?’ He is adamant he has not put a foot wrong and he is in the right place, doing what he should be. He is told to leave early the next day, and he does.

David must have taken this to the Lord and got his instructions. As he returns, he is met with the worst possible scenario. His camp has been destroyed and everything burned or taken captive. Imagine your family in the hands of your enemies. David’s loyal men were ready to stone him. It is at this point he once again turns to the Lord and finds his strength.

As you read on through the following chapters David continues to go to God for his directions. ‘Shall I pursue this raiding party?’ In this case God says ‘yes’ and guarantees success. David defeats his enemies and returns all that was taken.

Read 2 Samuel 5.18. David asks God again if he should attack, the answer is ‘yes, and I will hand your enemies over to you.’ In verse 23 David asks the same question and his answer comes with an even clearer attack strategy and a promise of support.
​
Throughout this story and beyond these few chapters, we see David in the raw. A man who dearly loved God and was obedient. We also see his emotions. He mourns, weeps bitterly, tears his clothing gets angry and rejoices. God used all of who David was. We must not hide away from our humanity. Rather, we must allow God to use it for his purpose. Our trust in God will grow as we allow him to work out His purpose as we become obedient to Him with what he has entrusted to us.
Tim Sparkes
​Return to Tim's notebook