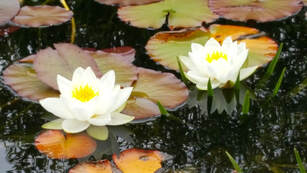 It would be very easy for a Phlegmatic to use the Sanguine as an escape from the fears or anxieties within the Phlegmatic. The danger then is that it feels like a choice between the restriction of the Phlegmatic or the wildness of the Sanguine. You can fear yourself.

The solution is to know the Lord's love deep within the Phlegmatic and to relax in the knowledge that you are fine as you are. Relaxing can feel like the wrong thing but if you relax you are letting go of control - and only when you let go of the wrong kind of control will you use the right kind of control constructively. If you are that wonderful person as a Phlegmatic then, if you relax, you will naturally live out those qualities that lie within the Phlegmatic - and, because the Lord is within you, you will live out his nature - the fruit of the Spirit. It is a paradox - letting go of control so you can have the Spirit's self-control - 'for God gave us a spirit not of fear but of power and love and self-control' (ESV 2 Tim 1:7).

You can then be comfortable in the Phlegmatic and express it naturally and consistently through all the loveliness of the Sanguine.

This temperament mix has wonderful qualities of care and compassion. The Sanguine is kind and always wants to make things alright. The Melancholic's sensitivity and self-sacrificing nature means that he will do what it takes to care for the other person.

The problem comes in when the Sanguine Melancholic is not sure of his own value. He will then use those qualities to attempt to make up for what is lacking in that value. Instead of that caring coming from a secure place it will take on unrealistic proportions and the person will feel responsible for just about anything wrong within his vicinity. Even if he doesn't feel that a particular wrong thing is his fault he will still feel that he has failed because he didn't manage to fix it - even if it is nothing to do with him.

This becomes a burden of responsibility that is crushing. It saps the spirit and wears the person down. Their care and concern for the other person is not always understood and appreciated and sometimes it is abused. The Melancholic, with his strong sense of justice, will know this is wrong but will feel obliged to continue. Over time, anger can build up and sit beneath the surface, more often than not, showing itself as an anger against himself.

It is a short step from this mixture of care and anger to a self-destructive pattern that has the potential to destroy this lovely person. It is important that he talks the issues through with someone who knows him well and who will help him be objective about himself and his responsibilities.

Sanguine Melancholics and their lists

This temperament mix loves lists. It is their way of feeling in control. There is a right place for lists but sometimes it is right to let them go and just get on and enjoy life!

Why do the emotions of the Sanguine Melancholic loom large?

The Melancholic feels everything. There is no switch off button. The Sanguine is expansive. He moves out in ever-increasing circles. He builds and makes things happen. So, when the Melancholic feels something, the Sanguine takes those emotions and makes them bigger. They loom so large that they fill his vision and determine his emotional perspective. He knows only what he feels.

He has to learn that emotions are subject to his will. He doesn't have to be led or controlled by them. He can make choices that turn his emotions from being bad masters to good servants.

When a child is brought up in a home and is missed, that child can be given major internal dilemmas. For example, a Sanguine Melancholic child comes into life with lovely qualities, including the compassion and kindness of the Sanguine and the sensitivity and self-sacrificing of the Melancholic. What happens if the child is brought up in an environment in which she simply cannot express herself? At best she will question who she is but at worst she will condemn herself for who she is. When things go wrong in the home she will instinctively hold herself responsible - which make her feel worse about herself. She will turn against herself. That is the root of self-harm. She will want to damage herself physically because that is what she feels about herself emotionally.

Then, one day, she realises that people were wrong about her. She is not rubbish. She might have got some things wrong but if she could have been herself she wouldn't have gone through all that pain and grief. And then, being the compassionate and self-sacrificing person that she is, she feels for everyone else out there who also gets missed and goes through the same kind of pain. And, because she carries a strong sense of justice, she feels the injustice of what has been done to her, and to others, and she gets in touch with the anger that has always sat there and that she has consistently turned against herself in self-loathing.

What can she do with that anger? Forgive. But I will assume she has done that. How can she move past the hurt for herself and others? The answer is to use who she is - the whole of who she is - to make a difference. To pray and to act on behalf of those who are being missed. Once you know your value, turn your pain into fuel to make a difference to others. Don't run away from your pain - use it. And whenever you meet another example of that pain, let it strengthen your resolve and ingenuity in finding ways of bringing healing to others. In other words, the best way to work through your anger is to remove the cause of it - by spending your time being yourself!

The self-destruction of the Sanguine Melancholic

A Melancholic instinctively feels negatively about herself. If this is reinforced by negative responses towards this child, that negativity is greatly increased.

Because a Melacholic feels negatively about herself she will, largely subconsciously, conclude that she does not deserve anything good to happen to her. If she finds herself genuinely enjoying something she fears this will be taken away - because she doesn't deserve anything good to happen to her. Rather than waiting for this disappointment - why not make it happen and then you won't have the uncertainty of waiting for it to happen and for it to be taken away by someone else! So, if you are enjoying something, or an event is coming up that could be good, why not remove the possibility of disappointment and sabotage the whole thing?

The answer lies in the twin facts that God is good and God is love. Does a father watch his children enjoying themselves so that, at the peak of their enjoyment, he can snatch that fun away from them? God takes pleasure in our living life to the full and seeing the joy of his children. May we allow him to reshape our thinking so, in our attitudes towards ourselves, we live as children of God, reflecting his character.